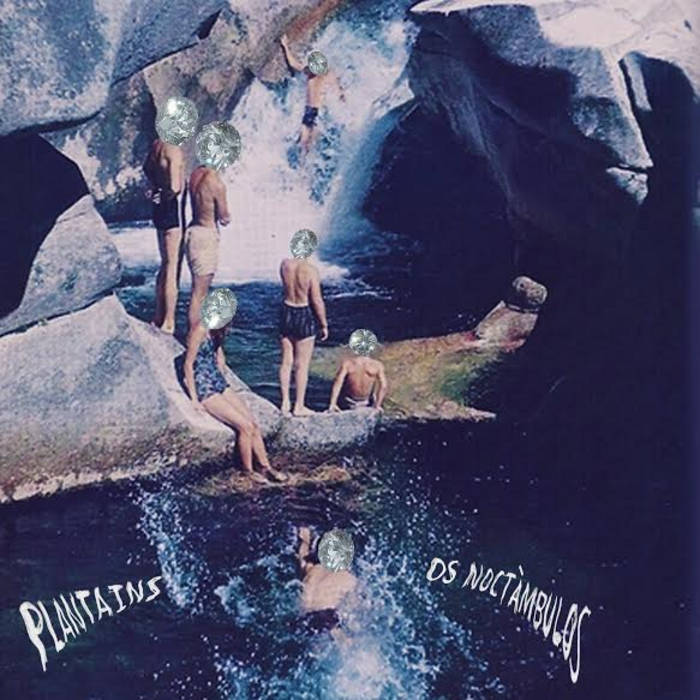 Hear Plantains side of the record at soundcloud.com/stolenbodyrecords/sets/plantains-os-noctambulos-split

This band based in Paris, has a portuguese name (The Sleepwalkers), an English singer and an album named after an island in the Mediterranean. But rhere's nothing confusing about these two records, which are both terrific and some of the best new stuff i've heard in the past six months. This is moody garage with surfy guitarsand organ but what sets it apart is the topnotch songwriting and vocals.

Songs like 'One Mistake' have such great lyrics that you'll swear they're familiar even though it's brand new; songs like 'Forget Everything' are plainative cries for help that you won't be able to get out of your head. This band only ocassionally rocks very hard or frantic, preferring a dark midtempo beat. I didn't notice that the first few times i listened though, it's all so well accomplished. The only thing that isn't perfect on these records are the intermittent surf instros, which just seem redundant when set next to songs this well written and executed. More, please!

Once the scream rips through "Northern Blood," I know my guests are in for a treat. The lovely morsels down in the basement feel fright grip them in a way they have never known. I however, grab another scotch and join the ghouls on the dance-floor. This split is one of the best I have heard in some time, with two excellent psychedelic rock bands putting forth their best foot and shaking the bones from a few skeletons in my proximity. We flip the record, and cool down with the fuzzed out surf hooks of Os Noctambulos. Sweat is pouring off of those still with skin and a request is made to play the record again. I oblige.

The Bristol-based label Stolen Body Records specializes in limited-edition vinyl releases, and they recently dropped one of their most ambitious albums early in 2014. It’s a split LP featuring the Grand Rapids, Michigan, psych crew Plantains (now known as Heaters) and Os Noctàmbulos, who hail from across the pond in Paris.
On this dazzling split LP, each band exposes their unique blend of garage, combining elements from surf rock, psychedelic and alt-country. It becomes an increasingly turbulent affair, starting with Plantains’ half of wet and slippery surf rock. Os Noctàmbulos take a different angle, serving up a rugged alt-country twang with a bluesy swagger.
“Hand in Hand (With the Devil)” sounds like a bandit’s anthem after robbing a bank: Dirty guitars are scattered around a stomping rhythm, decorated with colorful organ washes. We’re guided by frontman Nick Wheeldon, whose voice sounds sharp and tinny against a crunchy backdrop. Best described by the label, he’s carefully balancing on the edge of insanity in his frantic tone.
“Fruit Basket” is the undisputed highlight from Plantains’ contribution. It’s boisterous and completely invigorating, driven by a gritty backbone of psych guitars boiling in the enveloping haze. The rhythm is punchy and dense, built with rumbling bass lines and crashing percussion. It’s an absolute frenzy, pushing the track straight into evil territory. The LP comes on half blue, half clear frosted vinyl from Stolen Body — don’t sleep on it.

Michigan natives Plantains (now Heaters) and Paris-based Os Noctambulos worked together to create a split album that removes all doubt about the influence garage rock and surf music played on both of the bands.
Out February 17 via Stolen Body, the record counts on a really nice packaging: the two color vinyl perfectly fits the idea of a split album, with 6 tracks on each side.
Starting with Plantains’ contribute to the record, the A-side is a storm of fuzzy tones, saturated guitar/vocals effects and splashing: all of this paying a strong tribute to the 60s surf legends. Probably revealing their best with On The Fence, Plantains blended the acid tones of the psychedelic era with the powerful structures of garage music.
From their side, Os Noctambulos made a great work, arranging a collection of surf’n'roll tracks that blend catchy guitar riffs with dynamic patterns: give a listen to Hand in Hand (With the Devil) or Lizard In A Woman’s Skin to feel in love with their way of composing.
A sustained organ line gives the songs a peculiar background sound, enriching the structures with a old-fashioned vibe.
Ending the B-side with the bluesy You Make Me Mad (probably their peak on the record), Os Noctambulos proved their abilities in songwriting, creating a fine rock’n'roll ballad that features a simple but genial piano line.

Review by Listen With Monger

Right, try and stay with me here: This is a split album for the artists Plantains and Os Noctambulos. One of the artsists, Plantains, has recently changed its names to Heaters. So when I refer to Plantains, I'll be referring to Heaters. Got it? Good. Os Noctambulos haven't changed their name, it's just a mental name.
So, the first half of the album is given over to Michiganites Plantains (that's right, Heaters) with six tracks to impress the listener. 'Northern Blood' and 'Fruit Basket' are the opening salvos full of beautiful, surf-garage guitars and rumbling, rolling drum beats to keep things moving along at a good lick. The brooding cool of 'Wendy' is the sound of the devil's Cadillac approaching through a red mist surrounded by a swarm of Hell's Angels bikes ready to drag race you for your soul. Having said that, 'On The Fence' is a lighter jangly affair which is akin to Black Rebel Motorcycle Club in as chirpy a mood as they muster from behind their dark glasses. Nevertheless, it does descend in to a long, squally, Doors-esque internal exploration which, if you close your eyes, sounds exactly like the moment you've ever left any gig or rock club because you've realised you are just too wasted to stay and the bass drum is making you want to puke. 'Beach Blonde' is a snarly, gnarly garage tune with great hooks and a bass line to die for while 'Love Bird' is almost a summer anthem if it wasn't for all the distorted and delay ridden vocals that sound like the last protestations of a twisting soul.
Os Noctambulos are up next with their six tracks to impress and the Parisian combo (albeit fronted by an Englishman) are no slouches. Instrumental opener 'Damaged' is a great dual between organ and guitars as the sound of 60s beach parties is instantly conjured up in the air around me. 'Song For Olivier' and 'Hand In Hand (With The Devil)' are both dripping in super-cool, swagger in and take your woman right off your knee kind of songs that should be played loudly from open top cars during road trips that arrive in Vegas just before the witching hour. The wonderfully named 'Lizard In A Woman's Skin' is all low, twangy guitar notes and organ washes while the up tempo and head bobbing nature of 'One Mistake' is just a beautiful thing - not necessarily original but certainly beautiful. Finishing up with 'You Make Me Mad', the band take a mellower, almost Mersey Beat-esque approach to proceedings that shows off their range a little more.
Neither of these bands are breaking particularly new ground but they do what they do extremely well and I bet the live shows are intensely enjoyable. I bet they're all really, really cool as well. I mean seriously cool.

Surf ‘n’ Turf! Plantains (who has changed their name to Heaters since these recordings) and Os Noctambulos got together and released this split-album on the British label Stolen Body Records last month. Plantains lean towards a psychedelic expression, with hot-tempered fuzz/reverb drenched vocals/guitars (think Night Beats/ The UFO Club). Os Noctambulos has a cleaner, classic sound and adds a thick organ in the mix. Both bands has a highly surf-influenced 60′s garage-sound, and fits very well together on this split. 6 tracks each on their separate sides equals 12 tracks of furious, classic guitar-work and vocals boiling with attitude. The vinyl looks stunning, and is unlike anything else I’ve seen this far! The Half Blue/Half Frosted wax really takes both the split- and the wave theme to another level. Solid!

All Vinyl available from the links below. Free Downloads from this site only.

Bandcamp Daily  your guide to the world of Bandcamp